NEW DELHI: Highlights of the railway budget for 2011-12 presented in the Lok Sabha on Friday by railway minister Mamata Banerjee: 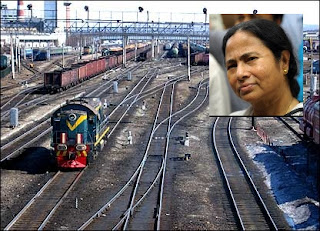 – No increase in fares.

– Passing through a difficult phase; 97 percent increase in expenditure in 2010-11 due to implementation of Sixth Pay Commission report.

– Ten-year backlog of 1.75 lakh jobs being addressed; 16,000 ex-servicemen to be given jobs in railways.

– Railways always been a soft target but law and order a state subject. If railways are blocked in one region, this has a snowballing effect in other parts of the country.

– Integrated suburban network to be set up in Mumbai, Chennai, Ahmedabad and other cities; suburban system of Hyderabad to be strengthened.

– Mumbai suburban system’s EMU coaches to be increased from nine to 12.

– Industrial park to be set up in Nandigram, West Bengal.

– Railways to set up factory in Jammu and Kashmir.

– To set up Metro coach factory at Singur, West Bengal.

– First coach from Rae Bareli factory to roll out in next three months.

– Work on wagon factory in Orissa to begin after land is acquired.

– Manipur capital Imphal to be soon connected to railway network.

– Centre for excellence in software to be set up at Darjeeling.

– Fund to be created for socially desirable projects.

– Work on upgrading 442 stations to be completed by March 31.

– Decision to start pilot projects to give shelter to homeless people living along the tracks in Mumbai.

– Multi-purpose smart card to be introduced for all-India travel.

– Airport-like trolleys to be provided at more stations.

– Railways to set up a sports cadre.

– Upgraded class of air conditioned travel to be introduced shortly.

– To adopt modern technology through centres of academic excellence.

– Train to run to Bangladesh to showcase Indian culture.

– Age for senior citizen’s concession reduced to 58 from 60.

– Concession for physically handicapped and gallantry award winners for travel in Rajdhani and Shatabdi expresses.

– 50 percent concession for mediapersons with families to be increased from once to twice a year.