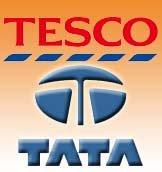 After wooing many Indian realty majors and retailers, including Bharti, the Wadias, DLF and Parsvnath, UK’s largest retailer Tesco has decided to go solo by developing a cash-and-carry business with an investment of £ 60 million in the first two years.

It has simultaneously zeroed in on a tie-up with Trent, the Tata group retail arm, to develop the latter’s discount hypermarket format.

The cash-and-carry business, also known as wholesale outlets, is the only retail format where 100% FDI is allowed. Tesco international & IT director Philip Clarke said, “We have made no secret of our wish to enter India and have had a team here for almost three years studying the market, talking to businesses and consumers and looking for the right way forward.”

While Tesco joins German rival Metro–the first to enter India in 2003–in opting for the wholly-owned cash-and-carry operations, Wal-Mart has a 50:50 JV with Bharti group and Carrefour is still exploring India.

The exclusive arrangement with Trent, for which Tesco will receive a fee, is one where the former can draw from the British chain’s vast retail expertise and technical capability to support its own big box format Star Bazaar, which has been on a slow track, according to retail analysts. Launched in 2004, there are four Star Bazaar stores in the country.

Looking for sharper management focus and improvement in operations, Star Bazaar was recently transferred to a 100% Trent subsidiary, Trent Retail. “In large format retailing in India, hypermarket is the most challenging and eventually rewarding, as it has been abroad,” said Trent MD Noel N Tata.

This (Star Bazaar transfer to Trent Retail) was done to beef up its large box format through local sourcing arrangements as against national sourcing.

This was done because as the latter was unviable, especially in food and groceries, due to infrastructure bottlenecks, tax inefficiencies and high freight costs. Another reason for hiving off Star Bazaar was that it could have tie-ups with international retailers to enhance its know-how.

Both these requirements will be fulfilled through Tesco association. Apart from accessing the $99.5-billion Tesco’s marketing, stock management, retail information systems, cold-chain infrastructure and front-end services expertise, Trent will source merchandise for Star Bazaar from Tesco’s wholesale outlets in India.

Tesco has 3,729 stores in 13 countries. Its first wholesale outlet will be set up in Mumbai shortly. However, unlike South African chain Shoprite, which has a brand franchise alliance with city-based realty firm Nirmal Lifestyle, the Tesco-Trent deal wouldn’t see any Tesco branding at Star Bazaar outlets.

Trent’s other retail formats are Westside (apparel and lifestyle), Landmark (books and music) and Sisley (manages the Italian apparel brand).

“From one store in 2004, we at present have four stores, which will be expanded further,” Tata added.